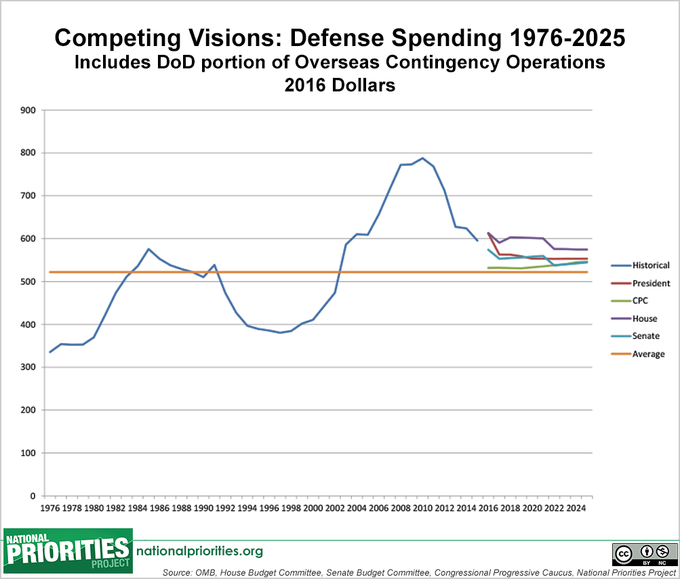 The horses are out of the gate on a great debate of the FY 2016 U.S. budget: in a world with the Afghanistan war winding down, but with renewed concerns about terrorism and the threat of ISIS, how much does America need to spend to stay safe?

To put that in context, $613 billion would put Pentagon and related spending at about the level it was in 2004, when the U.S. spent $90 billion on the wars in Iraq and Afghanistan.  It would also mean higher spending than at any point during the presidency of Ronald Reagan. And while these budgets are sometimes light on details, in the president’s version only about $5 billion of the total would be devoted to fighting ISIS.

So if it’s not for fighting ISIS, where would that funding go? Some items that the Pentagon has priced higher than the battle against ISIS include: the $11 billion the Pentagon has requested for development of its over-budget, never-used F-35 jet fighter; the $8.8 billion requested for ballistic missile defense; or the $5.7 billion requested for its “Virginia” attack submarine – none of which are particularly relevant to the fight against ISIS, the threat that Americans are most concerned about.

What alternative do we have to this bloated Pentagon budget?  The defeated Congressional Progressive Caucus (CPC) budget would have spent $530 billion in FY 2016 – about the same as spending in 1991 during the first Gulf War, and higher than many years during the presidency of Ronald Reagan, in inflation adjusted terms.  By 2025, the CPC, Senate and President’s proposals all would have amounted to roughly equal spending on the Pentagon – only the House budget was higher. The CPC budget hardly left the Pentagon destitute, but it would have spurred some genuine accountability at the Pentagon to cut programs that aren’t contributing to our security in meaningful ways.

In addition to how much funding, another battle this year will be how that funding is delivered. The House and Senate proposals both provide $530 billion through regular funding channels – the most that can be appropriated for FY 2016 without triggering the automatic spending cuts known as sequestration. But they then provide more than $90 billion in war funding (of which only a small portion would go directly toward fighting ISIS), or Overseas Contingency Operations (OCO), to bring the total to about $613 billion.

Notably, there is no non-defense equivalent of war funding to provide for domestic needs, for which spending is capped at about $493 billion for FY 2016. Also notable is that while war funding (or OCO) may not count toward the legal budget caps, it still counts toward the deficits that many lawmakers claim necessitate lower spending on domestic investment in infrastructure, education and job creation.

So while Americans are concerned about ISIS, the current spending proposals are cynically taking advantage of those concerns to throw more money at the Pentagon in ways that don’t address the threat, all while leaving programs at home in the lurch. Americans can have both safety and prosperity at home, but it’s going to take more accountability on the part of the Pentagon than we’re seeing right now.

Where Your Tax Dollars Go: Federal Funds vs. Trust Funds »