Trump's 4th of July Fiasco is a Salute to Pentagon Waste 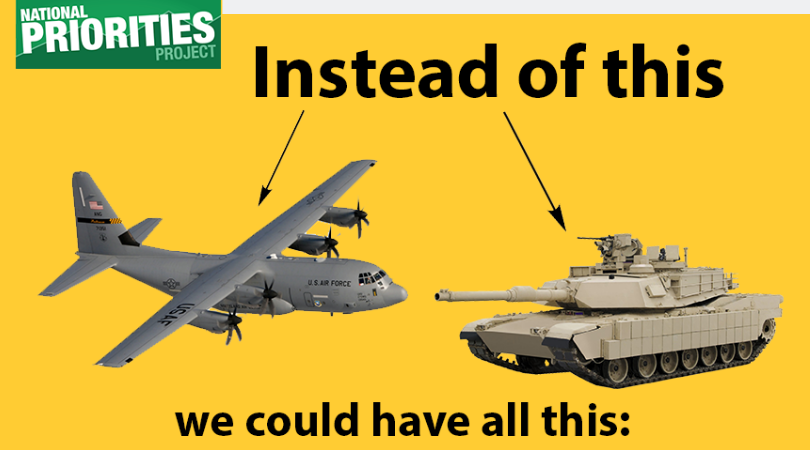 This year, President Donald Trump is turbo-charging Washington DC's annual Fourth of July celebration on the National Mall into an even more garish extravaganza of U.S. militarism than usual.

The event is reportedly diverting almost $2.5 million from the National Park Service in order to cover just a fraction of the extra costs to the federal government, but that’s nothing compared to the cost of the advanced military weaponry that will be flaunted — which also happen to be some of the Pentagon’s deepest money pits.

The Washington Post reports that the Independence Day display will include Abrams tanks, which were earmarked nearly $600 million that the Pentagon didn’t request in FY 2018, despite being continuously singled out as wasteful by lawmakers and government watchdogs. $600 million is enough to provide a year of VA medical care for 58,073 military veterans, or healthcare for 253,089 children, according to our Trade-offs tool.

A flyover by an array of fighter jets is set to include an F-35 Joint Strike Fighter, as well as Air Force F-22 Raptors, which represent some of the most egregiously over-budget weapons systems in the U.S. military — a “flock of procurement fiascos” over Washington, as Steve Ellis of Taxpayers for Common Sense called them in the Washington Post.

Both of these fighter jets are among the obsolete, dangerous, or excessive weapons systems that the National Priorities Project includes in our Moral Budget’s proposal to slash the Pentagon’s bloated budget by $350 billion, which identifies $57.9 billion in annual savings from cutting unnecessary weapons.

Annual costs for the F-35 jet fighter, which is notoriously plagued by flaws and safety issues, add up to $14.7 billion. That amount would pay a year’s salary for 181,881 elementary school teachers, or 4-year scholarships for 417,420 university students.

The F-22 Raptor fighter jet program, which was so overbudget that it was cancelled in 2009 before being revived again by this administration, costs $3.9 billion a year. That’s enough to support a year’s salary for 52,649 jobs in clean energy — about as many jobs that currently exist in the U.S. in coal mining. Or it could power 6.25 million households with solar electricity for a year, or 6.71 million households with wind energy — more than all the households in Pennsylvania.

Our government can more than afford to meet basic needs of the 140 million people who live in poverty, or are just one emergency away from being poor, in the richest nation in the world. But our representatives only think big when it comes to militarized spending.

The President is calling this year’s 4th of July celebration a “Salute to America.” Really, it’s just a salute to the power that private weapons contractors have over our federal budget.

Amendments to the 2020 NDAA That Would Be Good, Actually »