The President's AUMF and the Cost of War 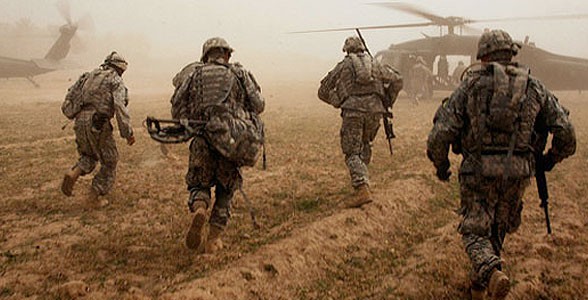 President Obama sent language to Congress on Wednesday seeking an Authorization of Use of Military Force (AUMF) for military action against ISIS, which seeks Congressional approval for war in the Middle East for the next three years.

Our nation has been engaged in military action against ISIS since June 2014, at the cost of $312,500 per hour to American taxpayers. In just the past eight months, we have spent more than $1.8 billion on military force in the Middle East, without Congressional authority or full debate by lawmakers about the costs of continued war in the region. It is important that Congress engage in transparent discussion about the U.S.’s military role against ISIS, and we are glad that the president is finally asking for this debate through a Congressional vote on an Authorization of Use of Military Force (AUMF).

That being said, we are concerned about the implications for American taxpayers and our federal budget if the United States engages in renewed and expanded military action in the Middle East. Over the last 14 years, our nation has spent more than $1.6 trillion on war in Iraq and Afghanistan – plus countless more in the human cost and long-term investment necessary to care for veterans who return from a grueling conflict. With our federal budget still burdened by these seemingly endless wars,  and many pressing social and economic needs at home, now is not the time to sink trillions more into an endless war overseas, especially when polling shows Americans would like to invest in domestic priorities.

Another point of concern is that while the proposed AUMF is limited to three years of military action, it leaves in place the broad and open-ended 2001 AUMF that authorized the use of force in Afghanistan, and under the president has justified current action against ISIS. This raises the question of whether the new AUMF in fact leaves open a very real possibility of a new open-ended war, with a price tag to match.

Ultimately, American taxpayers deserve to know whether ongoing and increased investment in war will actually reduce the threat of terrorism against our country. With compelling evidence that each round of war fuels subsequent wars and terrorist outbursts, there lie deeper questions about whether the trillions of dollars spent on military force only serve to foment more unrest. Lawmakers must carefully consider not only short-term action, but also longer-term consequences before prioritizing military action over other means of influence toward peace and security.

As Congress debates the president’s proposed AUMF, the American people must also weigh in on the continued financial and human costs of war.

Let your congressperson know where you stand while negotiations unfold.

« The President's 2016 Budget in Pictures

Webinar: Get the Facts About How the President Wants to Spend Taxpayer Dollars in 2016 »